One of the great things about Las Vegas weddings is how much diversity our town has to offer!  Beautiful wedding ceremony at 5 start resort?  Got it.  Elegant reception at a top notch restaurant inside Crystals City Center?  Got that.  Throw in 50 of your closest friends and family and you’ve got a wonderful wedding!  That’s exactly what Samantha & Zohail did in July.  Guests enjoyed a ceremony at Wynn Las Vegas, then headed to the Mastro’s Las Vegas wedding reception.   Samantha had a timeless black and white color scheme with personal touches and purple floral incorporated at in her centerpieces.  Family and friends travelled from around the world to celebrate and honor their marriage.

The day began in a beautiful suite with Megan Payne from Makeup in the 702.  Check out these lovely getting ready details.  Christian Dior wedding shoes make our hearts go pitter patter!

After the beautiful ceremony at Wynn Las Vegas, pictures were taken around the hotel property.  The ring bearer wasn’t too thrilled to have to keep smiling for pictures.  To be honest, one of the best parts of weddings are the darling kids and the fun memories they create!

Mastro’s Ocean Club inside Crystals at City Center is a delicious restaurant which hosted dinner, dancing and a great party!  Flowers of the Field provided the purple and white centerpieces.

We love a bridal party that dances their way through the grand entrance.  It creates so much energy and a great vibe for the evening.  Sam & Zo had their darling baby girl dance with them for their first dance.  So adorable.

As many of you know, I recently became engaged to Case. After seven and a half years, he finally popped the question. Many of our friends and family would say, “It’s about time!”. I really wanted to share with you how Case decided to ask me to marry him as it is quite unique and fits us as a couple so well!

Case and I go to shows/concerts all the time and many people wonder how we can do it so often, but as a couple we like a lot of different music and can always find some musician/band that is in town playing. So, on November 27th, one of our favorite bands to see in Las Vegas, New Found Glory, was playing at the Hard Rock Cafe on the Strip.

Case had a whole plan up his sleeve and I had no idea anything was about to happen. Case still being the same Case, cracking jokes all night and acting totally normal. As we go through security, I realized they were using a security wand everyone going into the show, somehow I got skipped as the security guard was walking up to Case to get ready to wand him. Now you will see why I got missed below… 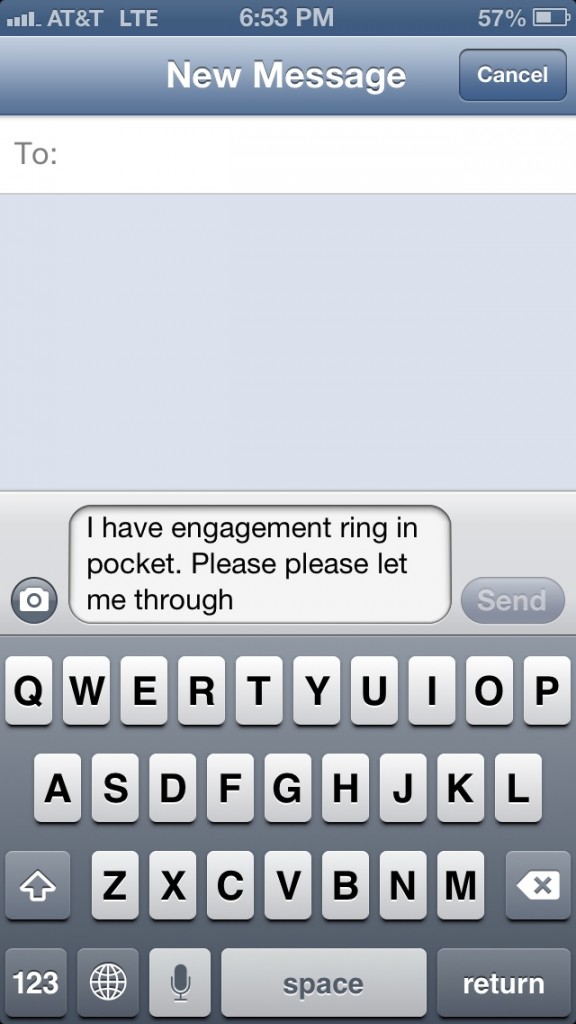 He was worried that the whole plan would get ruined at the very beginning of the night, so he typed a message to the security guy! So cute.

We enjoyed the first band that opened for New Found Glory and then decided to go look at the merchandise table. Angelica of Green Orchid Events was in attendance as well and came along. I do vividly remember Angelica saying, “I could use some New Found Glory merchandise, I will come along.” Little did I know she was in on the secret as well! I asked to look at a sweatshirt that was at one of the tables and low and behold I ended up with two items instead of one. Before I knew it, Case was down on one knee with an amazingly beautiful ring in a box and I had a shirt in my hand that said, “Will you marry me?”

Case had a mutual friend of the merchandise guy and met up with him to give him this shirt that he had made and had the whole thing planned out earlier that day. I could not be more happy with the way everything turned out and think it is 100% the perfect proposal for me as going to concerts is something that we do on a regular basis and really enjoy to do together.

Thank you so much to Angelica, for being an awesome friend and enjoying the concert with me and capturing the photos you did.

I hope you enjoyed this story as much as I did sharing it with all of you. XOXO- Traci

There are so many great things we can say about this couple, but we will let the amazingness of the photos below tell most of the story. Melissa and Sean are two sincere people that realized having a Las Vegas wedding planner for their wedding was something that was of interest to them. Scheme came in to make sure everything was taken care of, set up, napkins folded and bridal party was lined up.

Every detail of this wedding was simple and filled with love from the couple. From a ceremony that was preformed by a dear friend of Melissa’s, a ring holding ceremony to involve all the guests, an intimate first look session that makes us smile every time we see the images and one of the most amazing choreographed first dances we have seen in quite some time, this wedding rocked. Melissa and Sean tied the knot at Springs Preserve on September 2nd, 2012 and we could not be happier for them! Take a peek below to see more from this amazing wedding captured by Chelsea Nicole Photography. We hope you enjoy them as much as we did!

Congratulations Melissa & Sean! We are so thankful you had Scheme Events be a part of your wedding day!